Royal Mail introduces new 2nd class stamps, but Shaun the Sheep is a welcome distraction from the real story 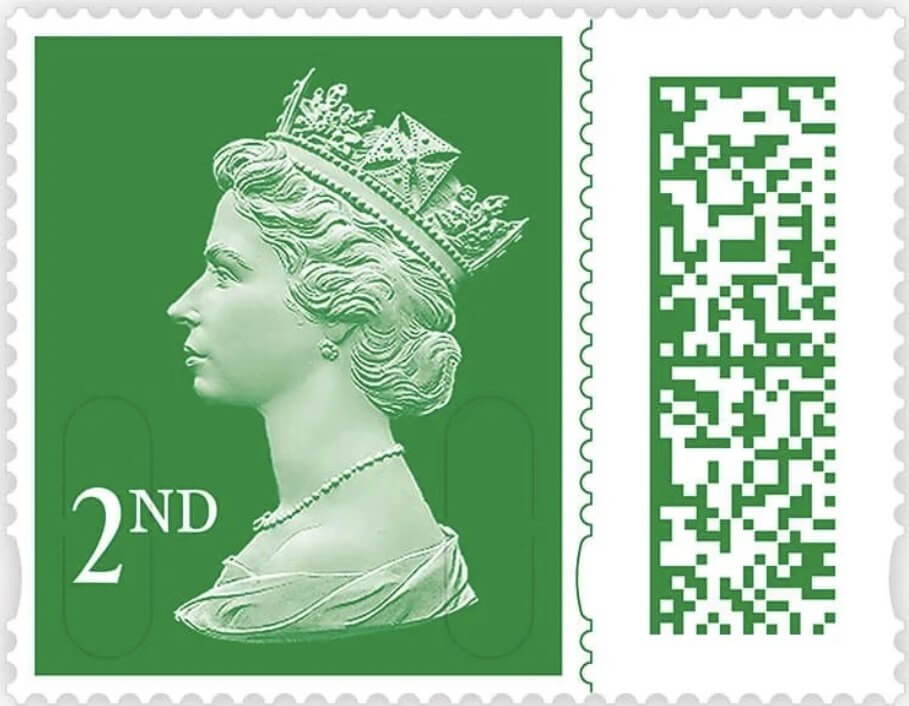 Yesterday, Royal Mail announced that they are changing forever the world of Machin stamps. In a press release the company announced that following a successful national trial of barcoded stamps, (see image below) they would be rolling these out, as standard, with immediate effect. Because of this, all non-barcoded Machin stamps, along with special Christmas stamps, are going to be demonetised on 31st January 2023.

The headline, picked up by the National Press, was all around the ability to track and trace post with these new stamps and, inevitably, that by scanning the barcode users can get unique videos, starting with Shaun the Sheep.

What they all appear to have missed is the bigger financial story surrounding this, namely that this is a massive revenue protection grab by Royal Mail to shore up its Balance Sheet.

Royal Mail has known for years that they are losing money due to people either using fake stamps or reusing stamps that have been through the post but have not been cancelled. In the case of the former, there is a steady flow of these into the UK, mainly from the Far East, where they have managed to forge the simple Machin stamps in their millions. Despite the introduction of security measures such as codes on the stamps and even on the backing paper, forgeries still flood in. What has been missed by all the reports is that these new barcode stamps stop this trade at a stroke.

The second category of reuse of stamps has been an issue for many years. Currently, you can buy large quantities of these stamps on eBay for relatively little money. It’s not difficult to separate self-adhesive stamps from their backing paper and then reaffix them to a new envelope, effectively giving you free postage. Why they are uncancelled is (or at least should be) a source of embarrassment to Royal Mail.

As far back as back 1840, when the Penny Black was introduced, there was a clear instruction that when the stamp was affixed on an envelope it had to be cancelled. At first, this was with a hand canceller but then later, in the early 1900s, machinery was introduced to do this automatically and to cope with the massive increase in postal volumes. It used to be that all stamps ended up cancelled once used but today, so much of the mail gets missed by the machinery that vast quantities of these stamps end up on the secondary markets. Their solution, to date, has been to issue posties with marker pens and ask them to scribble through any stamps that are uncancelled before they are delivered. Of course, this simply hasn’t worked.

Which brings us to the real thrust of yesterday’s announcement. The press release from Royal Mail quotes their Chief Commercial Officer, Nick Landon as saying “Introducing unique barcodes on our postage stamps allows us to connect the physical letter with the digital world and opens up the possibilities for a range of new innovative services in future.” Whilst this may be true, what he omitted to say is that it is simply phase one of a two-part strategy to reclaim revenues and scrub out a massive unrecorded hole in their balance sheet.

The problem stems from the fact that our present monarch has been on the throne for an extraordinarily long time. Queen Elizabeth II acceded to the throne in February 1952 and was crowned monarch in 1953. This makes 2022 her 70th year of service and her Platinum Jubilee. During this period, the only major change from a postal revenue point of view was decimalisation in 1970. When this happened, all stamps bearing the old pounds, shillings, and pence were demonetised and decimal values were introduced.

What people don’t always realise is that decimal stamps issued in 1970 are still able to be used today as valid postage.  These stamps shown below were issued in June 1970 are all still valid for use on mail today.

What has always been an inconvenient fact for Royal Mail is that each year, they sell more stamps than are used in the post. This means that at the end of each year, there is a theoretical liability to Royal Mail from these stamps still being in existence. If, for example, they sell a million pounds worth of stamps and just half a million pounds worth are used on posting items, then the other half a million pounds is yet to be used. Of course, as stamps have no ‘use by’ date then they can safely be used whenever you like, if they are in decimal currency and have not been demonetized. And to date, Royal Mail has not demonetized any stamps since the old pre-decimal stamps in 1970. This means that they are currently carrying a theoretical liability for over 50 years of unused stamps.

In practice, it’s unlikely that everyone will suddenly dig out millions of pounds worth of old stamps from collections, cupboards and drawers and use them on posting items. If they did, then RM would have to accept them and effectively not receive any revenue today for providing their service, the payment having been made in advance, many years earlier.

The introduction of barcoded stamps and the subsequent demonetization of all existing Machin and Christmas stamps removes millions of pounds of liabilities from the market and from the balance sheet. Royal Mail has said they will be introducing a ‘Swap Out’ scheme allowing people with these stamps to send them in and receive new, barcoded versions in their place. The swap scheme will open on 31st March 2022 and whilst they have not publicly commented on how many they expect to receive, I’ve already seen comments from some stamp dealers suggesting that they may use this as an opportunity to offload vast stocks they hold, meaning Royal Mail will have to exchange hundreds of thousands of pounds worth of stamps.

But as I say, this is simply phase one of the strategy and although it removes the biggest source of revenue loss, the forgery or reuse of Machin stamps, there remains the issue of all the other commemorative stamps issued since 1970 which are also valid for postage. Which brings us to phase two, which will happen independently of any decision Royal Mail may make.

When a monarch dies, the stamps of that reign are typically still available for use during the subsequent reign, but only for a limited period. With decimalization in 1970 came the opportunity to render all previous GB stamps invalid and as such, all stamps from George VI, Edward VIII, and George V were demonetised. When our present monarch passes, the opportunity to demonetize will present itself once again and I expect this to be phase two of the plan to remove revenue liability. In fact, I forecast that unlike the transition from George VI to QEII, where the stamps of his reign were still valid for a further eighteen years, the validity period after our Queen dies will be less than five years.

Of course, time will tell whether this is correct or not but given the speed of change in the postal market and the rise of digital services, the quicker Royal Mail reduces this liability the better from their point of view.

So, where does this leave the humble 2nd class stamp? Well, as of yesterday there were two new stamps made available for second class services, the standard 2nd class stamp and the 2nd class large, both shown below.

These stamps are now available for use alongside existing 2nd class stamps and for the next year, they will be used concurrently. At the moment, the cost of a second class stamp is still 66p as we write this in February 2022, but if you look at the history of 2nd class stamp prices, you will realise that they are probably due to rise soon. Royal Mail has already announced changes to their Access General Large Letter services and Wholesale Parcels services from 4 April 2022 so don’t be surprised if we soon hear of a rise in second class postal rates.

I suppose we should congratulate the team at Royal Mail for what is, frankly a masterstroke. In a very short space of time, they will be removing liabilities, stopping forgery, and hopefully, improving their ability to track where the post is at any time. Of course, if you look back, you can see that post used to be delivered same day in certain parts of the UK, all stamps were being cancelled so there was no reuse and post generally didn’t go missing. So apart from blocking the forgers, we seem to be back to where we were twenty years ago.

2 Comments on “Royal Mail introduces new 2nd class stamps, but Shaun the Sheep is a welcome distraction from the real story”